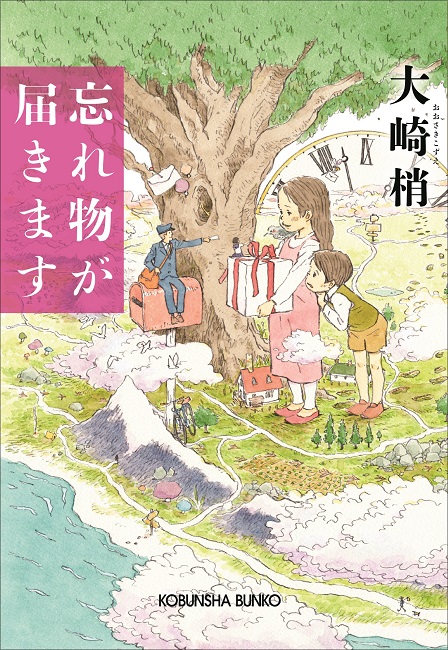 In this collection of five short mysteries, “Nobara no niwa e“ (To the Garden of Wild Roses) takes place at a luxurious villa in the old capital of Kamakura, south of Tokyo. Shihoko Toyama, heiress to a shipping fortune, is now 73. She has asked Kaoru Nakane, a young woman who works for an editorial production company, to help her set down her personal history. As Kaoru commutes from Tokyo to Kamakura for the repeated interviews, she becomes increasingly captivated by Shihoko’s narrative.

The central event covered is an incident that took place at the same villa nearly six decades earlier, in July 1955. At 23, Shihoko’s older brother Sōtarō, presumed heir to the family business, was engaged to be married to 21-year-old Tōko Kōsaka. A big party had been planned, and many of Sōtarō’s friends were gathering for it, but on the day before it was to take place, Tōko disappeared. When a gardener testified that he saw Tōko slipping out the back door of the villa with a man, the mystery appeared to be solved. The wedding was called off, and the devastated Sōtarō soon quit his job. He subsequently died of cancer, and Shihoko and the man she married succeeded to the family business.

Having reached the twilight of her life, Shihoko had recently begun making some inquiries in the hope of uncovering the full truth about what had happened, and the gardener had recanted his testimony. Now she tells Kaoru that when they meet the following Thursday she will read her a letter Tōko wrote to Yōsuke Nakita, one of Sōtarō’s friends. It seems Tōko was actually in love with Yōsuke.

But on Tuesday, Kaoru receives word of Shihoko’s sudden death. And when she attends the funeral, the picture on the altar is not of the woman she has been interviewing. It turns out she has actually been interviewing Tōko, whose help Shihoko had sought out following her preliminary inquiries on the grounds that they had both been victims of deception. In 1955, Tōko had fled the villa with the help of Yōsuke and Makio Nishiyama, another of Sōtarō’s friends, and when Yōsuke reneged on his promise to elope with her, she had moved to America, where she found work as an actress. In the interest of furthering their own careers, Yōsuke and Makio had been acting on Sōtarō’s father’s wishes to sabotage his son’s marriage plans, and it was at their instruction that the gardener had lied at the time of the incident.

In each of her stories, author Kozue Ōsaki focuses her narrative lens on unexplained mysteries that continue to tug at the characters’ minds long after the events actually took place, deftly unraveling the truth across long stretches of time.

Kozue Ōsaki made her literary debut in 2006 with Haitatsu akazukin: Seifūdō Shoten jiken memo (Red Riding Hood Delivery: The Seifūdō Bookstore Case Files), a collection of linked stories featuring as the detective a female college student with a part-time job in a bookstore, a livelihood the author herself held for a time. Three additional volumes followed, with both bookstore staff and book reviewers talking the series up and helping cement Ōsaki’s position as a writer. She has since produced a steady stream of popular works for children as well as adults, mainly in the puzzler vein. Her other titles include the Hiradai ga omachikane (The Display Tables Are Waiting) series, which features a publisher’s sales rep as the protagonist; the novel Sunōfurēku (Snowflakes), which became a feature film; the novel Kimi wa shiranai (You Don’t Know); and the story collection Wasuremono ga todokimasu (Forgotten Items for Delivery).
www.k3.dion.ne.jp/~oosaki//index.html