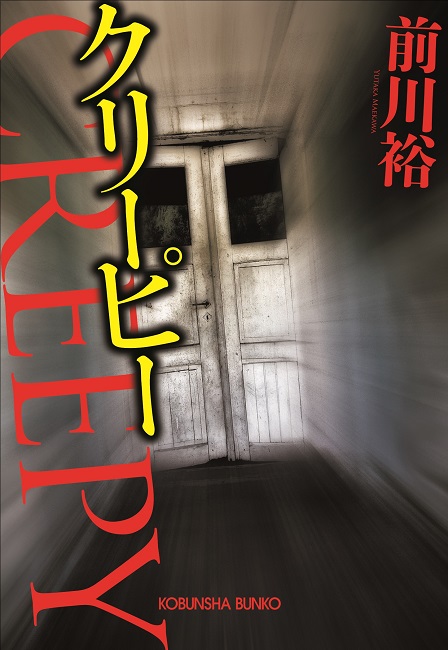 Who is the person who lives next door? Koichi Takakura is a criminology professor who lives with his wife Yasuko in the suburbs of central Tokyo. Like many married couples, the Takakuras hadn’t given much thought to the people who live in their neighborhood. It’s upscale, quiet, and not a long commute to the university where Koichi is putting in a little extra work to help one of his students with her thesis. Feeling somewhat guilty about the casual dinners that follow their private sessions, he reminds himself that his association with the attractive young woman is nothing of a nature that he couldn’t tell his wife. It’s just simpler not to mention anything about it.

Meanwhile, his wife has started to notice the cold glare that sometimes appears in the eyes of Nishino, the charming man who lives next door. Although she often runs into his daughter Mio, who is attending junior high school, Yasuko finds it strange that she has never seen the girl’s brother or their mother. And Nishino is beginning to give her the creeps.

One day, a former high-school classmate drops by to see Koichi. Police detective Nogami is looking into an unresolved missing persons case that occurred in Hino City on the outskirts of the capital, and he asks Koichi for his thoughts on the recollections given by the daughter who had been away when her family disappeared.

A short while later, a fire breaks out in the house across the street and kills its two residents, but there’s also a third body found. A detective named Tanimoto visits Koichi at his university and tells him that it was Nogami.

As her concern for Nishino’s daughter mounts, Yasuko hears from the girl that the man in her house is not her father. Whether or not Mio means it literally, Yasuko and Koichi are convinced that there’s trouble going on at their neighbor’s residence.

They are awakened late one night by a knock on their door. Mio is white as a ghost, but before she can tell the couple what she’s running from, Nishino comes banging on the door and starts to threaten Koichi. The police arrive, the Takakuras are accused of kidnapping a minor, and the only consolation is that Mio is taken to a child welfare facility.

Nishino attacks the facility, kills the male manager, slashes Yasuko with a knife, takes Mio hostage, and disappears. With Yasuko in the hospital, Koichi takes up residence at a nearby hotel and returns home ten days later to find a present from his neighbor: the lifeless body of Mrs. Nishino. He also finds a letter from Nogami’s divorced wife Sonoko, another former classmate who has gone on to become a renowned concert pianist. Sonoko gives Koichi a letter from Nogami, which he had told her to pass on to Koichi if he died.

Meanwhile, Yasuko receives a photograph in the mail. Koichi and a young woman are standing alone in an elevator, and a brief note says the woman is her husband’s lover. Koichi tells his wife that there’s nothing to it; he’s been helping the girl with her thesis and offering her advice in dealing with a stalker. Koichi and the student suspect one of her classmates and confront him, but he is clearly innocent. There is one person to whom he had given his email address, the man who recently moved into the apartment next door. They ring his bell and by the time Koichi is certain that it’s Nishino—who is actually Yoshio Yajima, the half-brother that Nogami had explained in his letter he suspected in the Hino case—the neighbor turns vicious and stabs the classmate in his neck and flees.

A decade goes by, and the cases remain unresolved. One day, Koichi attends a piano concert by Yu Kawai, the adopted daughter of Nogami’s widow Sonoko, and he learns that the Paris-based pianist is Mio, the missing daughter of his former neighbor. He visits Sonoko at her home, and she admits that she had shot her husband with his gun, upset with his frequent infidelity.

Nishino (Yajima) had disposed of the body in the fire and had brought his hostage to Sonoko’s home, where he was subsequently poisoned by Sonoko. Koichi sees Yajima’s remains, lying in a room upstairs for ten years, and takes the remaining poison away from Sonoko. He tells her that she cannot take her own life if only for the sake of her daughter, and must overcome her cancer and continue to live.

Although Sonoko’s shooting of her husband had been inexcusable, Koichi feels that her ability to live with a dead body upstairs for a decade is both shocking and sad. He wonders if she had been under the illusion that she was still living with her beloved husband.

Sonoko’s recovery from cancer is later reported in the media, followed by news of her performances at home and abroad. It is eight years later that she dies of a recurrence of the disease. There is nothing in the news about the discovery of skeletal remains, and Yoshio Yajima continues to be treated as missing.

Yutaka Maekawa (1951–) was born in Tokyo and graduated from the Hitotsubashi University Faculty of Law. He subsequently completed graduate work in comparative literature and culture at the University of Tokyo, and held a number of academic appointments, including visiting professor at Stanford University, prior to taking up his current position as professor in the Faculty of Intercultural Communication at Hōsei University. He made his debut as a fiction writer after winning the Japan Mystery Fiction Prize for New Writers in 2011 for his novel Kurīpī (Creepy); the published book was voted No. 1 in the New Writer Top Ten of the 2013 Konomys rankings. His other titles include Atoroshitī (Atrocity), Koku: Hāshu (Harsh), and Aparishon (Aparition).