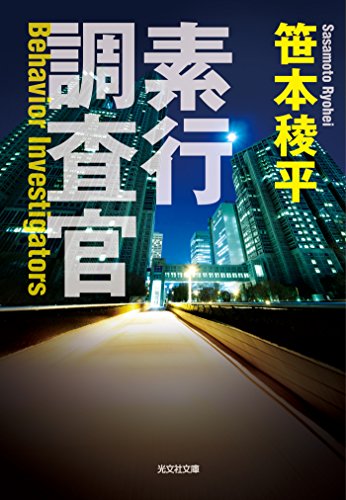 Takeshi Hongo, 34, is an investigator in the Internal Affairs section of the Tokyo Metropolitan Police Department. Formerly a private detective, he was taken on as an irregular hire by the MPD for his investigative and tailing skills. Internal affairs personnel look into suspicions of misconduct or lawbreaking by members of the force—which is to say, they police the police. This volume is the first in a series of three to date in which Hongo, his 50-something colleague Kazuhiro Kitamoto, and high-school classmate Toru Irie, the man who recruited Hongo to join the MPD, investigate a variety of incidents within the police organization.

Hongo’s first case upon joining the force involves an affair between public safety officer Mitsuo Asano and Chinese businesswoman Cai Xuanhua, 33. About the time the investigation begins, Xuanhua’s younger sister Lihua is found dead in a clear case of murder. As the investigation proceeds, the Chinese mafia is discovered to be lurking in the shadows behind Asano and Xuanhua’s affair, and it also comes out that high-level police bureaucrat Yoshihisa Honda played a role in the murder.

The suspect Honda, we learn, was born Chinese, but through the offices of Xuanhua’s and Lihua’s father, Cai Sunmin, he was adopted by a Japanese businessman. Honda has closely guarded this secret ever since. After growing up to become a career police officer, he began channeling inside information about the Japanese police to the Chinese mafia at Sunmin’s request, and used the large sums of money he gained in return to speed his advancement within the force. With his eye on becoming commissioner general of the National Police Agency, he attempted to make a clean break from his past, but his lover Lihau pressured him to marry her instead. Knowing that any revelations about their illicit affair could deal a mortal blow to his career as a bureaucrat, he murders her. Believing that his rival for the coveted post, the current assistant commissioner, is trying to gain damaging information about him through Asano and Xuanhua, Honda also murders Xuanhua—a victim, like her sister, of his unquenchable ambition for advancement and the fierce internal politics within the force.

The series continues in Hakuchumu (Daydream) and Roei (Leak).

Ryohei Sasamoto (1951–) was born in Chiba Prefecture and graduated from Rikkyo University with a degree in sociology. He made his publishing debut in 2000 with the novel Biggu buraza wo ute! (Shoot Big Brother!). His 2001 private-eye mystery Toki no nagisa (The Shores of Time) won the Suntory Mystery Grand Prize and took the Readers’ Prize in the same competition as well. He added to his honors in 2003 by garnering the Haruhiko Oyabu Award for Taiheiyo no bara (Pacific Rose). His collection of linked stories about troubled people who visit a mountain lodge, Haru wo seotte (Shouldering Spring), was adapted for release on the big screen in June 2014. His novels range from grand adventure stories to hardboiled mysteries to mountaineering tales.