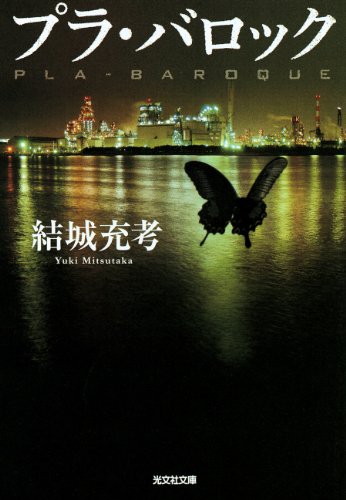 In a refrigerated container sitting on reclaimed land in the harbor district, 14 frozen corpses are found lying neatly in a row. The evidence seems to suggest that it is a mass suicide by sleeping pill, but the identities of those involved remain elusive, as does the connection between them. On the case is Ms. Kuroha of the Kanagawa Prefectural Police Mobile Investigation Unit. An expert sniper, her resume includes winning the marksmanship competition in the National Sports Festival. Fending off sniping of a different sort from the men in a department still dominated by attitudes of male supremacy, she has established herself as a lonely but cool-headed investigator with superb instincts for zeroing in on the telling facts of a case. She also maintains a presence in a virtual world on the Web under the name of Ageha (“Swallowtail”).

It comes to light that the individuals who committed suicide together have sent final testaments to the prefectural police by email. In each message, the sender enigmatically states, “I wish to die and become a memorial stone. I ask that someone please put it together,” and has attached a digital file of a 3D object. The objects are the senders’ death masks, and when they are put together, they form a “memorial stone” in the shape of a moth resembling the swallowtail butterfly. Also emerging is an image of the vicious mastermind who brought the group of suicidal individuals together—except that now he appears to be sneering at their final request to “become a beautiful memorial stone.”

The mastermind, who goes by the name of Kodo (“Pulse”), has left numerous leads in the virtual world on the Web. As Kuroha/Ageha pursues him through both real- and cyber-world channels, Kodo turns his vicious blade on Kuroha’s sister, killing her. As if that weren’t enough, he kidnaps the sister’s infant boy. Kuroha responds to Kodo’s summons and agrees to meet him in the real world. Kodo explains that he’s been haunted by murderous impulses since he was a child, and says he hit on orchestrating a mass suicide as the best way to satisfy them. The shot Kuroha fires in anger grazes Kodo but fails to kill him. It briefly appears that Kodo has gotten away, but then the boyfriend of Kodo’s first victim from five years before catches up with him and kills him. After the police had failed to apprehend Kodo, the boyfriend had continued to pursue him, drawing him into a trap in the virtual world and ultimately making good his real-world revenge after five long years.

Citing the novel’s masterful plotting and its highly original interplay between real and virtual worlds, the judges selected the work unanimously for the 2008 Japan Mystery Fiction Prize for New Writers. The work went on to sell over 150,000 copies in hardcover and spawned the sequels Ekoikku memorii (Echoic Memory) and Eisei o tsukai, watashi ni (To Me via Satellite).

Mitsutaka Yuki (1970–) was born in Saitama Prefecture. He became an avid reader of period novels and science fiction while in high school, and was subsequently involved with independent filmmaking before trying his hand at fiction writing in his late twenties. He made his publishing debut in 2004, when he won the Dengeki Novel Silver Prize for Kiseki no hyogen (Miraculous Expression). In 2008 he took the Japan Mystery Fiction Prize for New Writers for Pura-Barokku (Pla-Baroque); since then he has published two sequels featuring Detective Kuroha, Ekoikku memorii (Echoic Memory) and Eisei o tsukai, watashi ni (To Me via Satellite). His short story Ame ga furu koro (When It Rains; included in the volume Eisei o tsukai, watashi ni) was short-listed for the Mystery Writers of Japan Award for Short Stories in 2010. He has garnered a great deal of attention as one of a new generation of police novel writers.