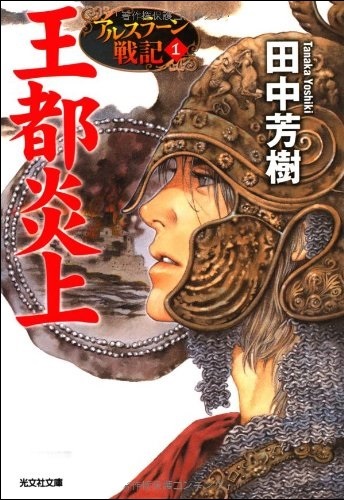 Known for its abundant resources, the Kingdom of Pars has been subject to numerous attacks by surrounding states, but it has always successfully repelled them. So when the Lusitanian army invades, King Andragoras III never doubts victory will be his again. At 14, his son Arslan, the crown prince, is seeing his first battle. But the king’s overconfidence, along with the betrayal of his vassal Kharlan and the enemy’s cunning battle plan, lead to the previously undefeated Pars forces being decimated in a single day. The kingdom falls, and both the king and his beautiful queen, Tahamine, are taken hostage by the victors.

The young Arslan narrowly escapes with his life and, with the support of intrepid commander Daryun, master tactician Narsus, the peerless fighter Gieve and others, vows to take back his kingdom. The treasonous Kharlan leads a unit of Lusitanian forces in pursuit of Arslan, but they are outwitted by the crown prince’s protectors and annihilated.

Meanwhile King Andragoras III is being tortured deep in an enemy dungeon when Kharlan’s overlord, the mysterious man known as Silvermask for the metallic face-covering he wears, appears before him. He takes off his mask to reveal a visage grotesquely scarred by burns. “I am the legitimate king of Pars!” he declares, identifying himself as Hilmes, the son of Andragoras’s brother, from whom Andragoras seized the throne by assassination 16 years before . . .

This is the first volume of a 16-volume historical fantasy tracing Arslan’s dauntless efforts to reclaim both the kingdom and his own parents lost to an invading army. The series has enjoyed undiminished popularity over the 30 years since its first title appeared. A manga adaptation began serializing in 2013, and a TV anime adaptation premiered in the spring of 2015.

Yoshiki Tanaka (1952–) was born in Kumamoto Prefecture and holds a PhD in Japanese literature from Gakushūin University. He is known in particular for three major sci-fi and fantasy series, two of them ongoing: the space opera Ginga eiyū densetsu (Legend of the Galactic Heroes, 1982–89), which has sold 15 million copies and counting in all editions, including manga; Arusurān senki (The Heroic Legend of Arslan, 1986–); and Sōryūden (Legend of the Dragon Kings, 1987–). A prolific writer, Tanaka produces works that range across a broad spectrum of genres including science fiction and fantasy, adventure, contemporary realistic fiction, and historical novels set in China.